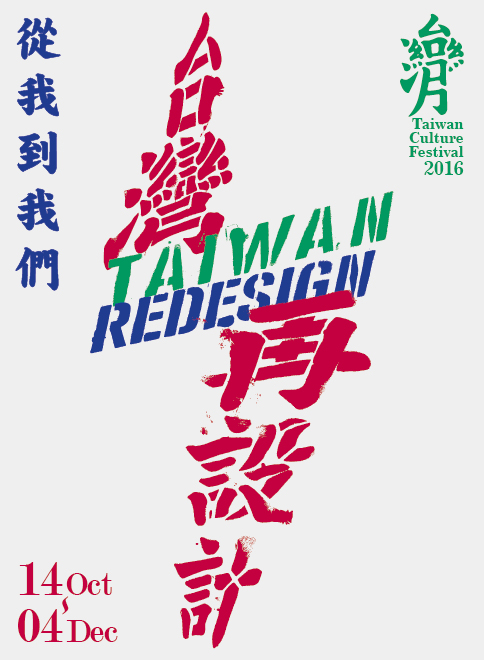 Taiwan Redesign - From I to We

The 11th Taiwan Culture Festival hosted by the Kwang Hwa Information and Culture Centre will be held on Oct 14 to Dec 14, with the theme "Taiwan Redesign - From I to We”. This year, the festival will share with Hong Kong the creativity and collaboration of a new generation of social design, showing the cross-border and open aspects of Taiwanese new culture. The most distinctive part of the festival is the cooperation between Taiwan and Hong Kong in organizing the programs. This cooperation fully reflects the concept "From I to We”, and brings out a more in-depth collaboration with the local cultural groups in Hong Kong.

The Taiwan Culture Festival 2016 spots on the aspect of social design in Taiwan, meaning "designing for social innovation”. It is about how people imagine, remold and implement a better society, passing on the value and self-identity of Taiwan, as well as reflecting the innovative thinking of Taiwan Redesign and Taiwan Redefine. The key vision of the Taiwan Culture Festival has also been redesigned by the young Taiwanese designer Godkidlla, inspired by the street graffiti commonly seen in Taiwan. The font in used is combining with the iconic plastic signs of Hong Kong minibus, and the words written in Traditional Chinese are in red and blue. It symbolizes the mutual understanding between Taiwan and Hong Kong, and the collaboration on the Taiwan Culture Festival this year.

Hong Kong is named as the food paradise, while Taiwan is praised as the kingdom of food. "Food” is the design topic of this year's Taiwan Culture Festival activities. The way how food has changed our lifestyle and how to build consensus and aesthetics in daily life will be discussed. The main bilateral curators, Su Min, co-curator of optogo from Taiwan, and Allen Poon, director of TETRA-X Limited from Hong Kong, will make a response to both life and times through the innovative works.

The well-known project "Dining in the Paddy” from Taiwan is an action drama that performing in villages, flipping the traditional Taiwanese values by serving creative dinner. The Project founders have been invited to collaborate with Pokfulam Village, the last traditional village on Hong Kong Island. Pokfulam Village has witnessed over 200 years of Hong Kong history and preserved the tradition of the Mid-Autumn Fire Dragon Dance, hence it is called the "living museum” of Hong Kong villages. Coinciding with the village festival events, residents from Sai Kung and Cheung Chau will join in the Taiwan-Hong Kong dining event. Participants will have the chance to enjoy the new flavor of Taiwan-Hong Kong fusion cuisine by using local ingredients.

"Eatopia - The Theater of Food Design” takes Taiwanese cuisine as the inspiration for its design. With the most controversial culinary design and molecular gastronomy, participants will be able to understand Taiwan by means of a theater performance and by tasting five dishes that have been specially designed by Michelin chefs. Taken from the Minnan dialect, xiulong (meaning collision) epitomizes the stimulation of new fusion created by every cultural collision and shows the concept of "Harmony in diversity, strive for great harmony” stated by Eatopia's Taiwanese designer, Shikai Tseng. The vacancy of participants for each performance is up to 30, and the tickets are booked through group registration.

The mobile innovation exhibition, "Urban Floating Islands @ Hong Kong” connects the communities between Taiwan and Hong Kong, to exchange views and understanding through the live chat of the forum session. On the other hand, three of the most influential creative people in Taiwan have been invited to the Taiwan Redesign Talk Series, including Han Wu, CEO of World Design Capital Taipei 2016, Yu Feng, a well-known designer and Shi-ren You, Planning Director of the TNH Center, to share the power of Taiwan's social design during this event.

The programs of the Taiwan Culture Festival continue to strengthen its crossover theme. During the Canonization Ceremony of Mother Teresa on 4 September, the Taipei Philharmonic Chorus jointly performed on stage with the Sistine Chapel Choir. Professor Du Hei, the Artistic Director of Taipei Philharmonic Chorus, personally will lead the 100 choir members on their first visit to Hong Kong to reproduce the classic piece "The Chinese Zodiac” with the performance of the Hong Kong Chinese Orchestra. "The Chinese Zodiac” was composed by Nan-chang Chien, winner of the Golden Melody Award, and its lyrics were written by his wife, Mei-chen Lai. Their collaboration was highly recommended by the public. Yu-chung Ku, the Music Director of the Taipei Philharmonic Chorus, will also be attending the Taiwan Culture Festival's press conference.

The highlight drama "Lord Guan Yu on Stage” is described as "a Peking Opera experiment in a small theater”, it has an extraordinary casting. There is cross-country collaboration between the heavyweight production teams in Taiwan and Hong Kong—with the screenplay written by Anqi Wang, winner of the National Award for Art and Artistic Director of Guoguang Opera Company, and with Mathias Woo, Hong Kong multimedia pioneer, not only in charge of stage design, but also acting as director. They've also recruited musical and multimedia talents from Taiwan, Hong Kong and Germany to add a sense of modern experimentation to the play. Wen-hua Tang, Taiwan's first contemporary xusheng (an actor in Chinese opera, typically wearing a false beard) and Principal laosheng (a dignified old man with beard) of the Guoguang Opera Company, will star as Lord Guan Yu. The creative concept of both traditional and modern will be performed in great anticipation! The producer of "Formosa Excursions: Soundscape of Taiwan” and winner of the Best Album Producer Golden Melody Award, Wu Jindai, the new generation innovative band, 3peoplemusic and winner of the Taiwan Music Composition and Songwriting Contest, Tai Siao Chun, will join together and share the inspiration they received from their lives, memories and the land, as well as the understanding of the Taiwanese attitude towards the land and the Taiwanese lifestyle.

Another highlight of the Taiwan Culture Festival is the "Taiwan Redesign Exhibition”, Taiwan artist Escher Tsai and Hong Kong artist Keith Lam from Dimension+ have been invited

to do a special design. Their work presents the concept of the wind blows from Taitung to Hong Kong, letting our friends in Hong Kong feel the breathing rhythm of Taitung's waves, just as the events of the Taiwan Culture Festival bring the beauty of Taiwan to Hong Kong. The exhibition starts from Oct 14 at eslite Hong Kong Causeway Bay Store and Tsim Sha Tsui store. The Taiwan Culture Festival will have more than 60 activities including music, theatrical drama, exhibitions, experience activities, talk series etc., from Oct 14 to Dec 4 2016. Please feel free to join in! For more details, please refer to Kwang Hwa's website：http://hk.taiwan.cultute.tw/