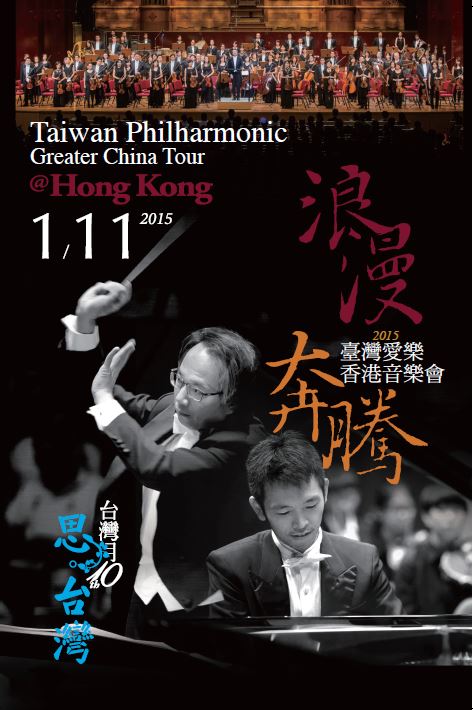 Lü's approach to Wagner seemed to take its cue from his strong affiliation with Iatlian opera, which resulted in an intensely lyrical interpretation that flowed with ease.

Lyricism is at the heart of Lü's style, and he brought this quality to Die Walkure as well. The result was a fluid, flowing approach, not a ponderous or weighty one.

"Under Lü, (NSO) made the fin-de-siecle sound world idiomatic. He coaxed from them a burnished, glowing sound that showed off Strauss' (Elektra's) luscious orchestration.” — OPERA

Taiwan-born conductor Shao-Chia Lü studied music in Taipei, later at the Indiana University in Bloomington, USA, and also at the College of Music Vienna. His training was topped off with three important first prizes at renowned international conductor competitions: Besancon, Trento and Amsterdam.

In 1995, he began his opera career as Erster Kapellmeister at the Komische Oper Berlin. Numerous guest performances followed, including the Australian Opera Sydney and the English National Opera, the Theatre de la Monnaie in Brussels, the opera houses of Frankfurt, Hamburg and Stuttgart as well as the Deutsche Oper Berlin. In 1998, Shao-Chia Lü took over the position of General Music Director of both the Staatsorchester Rheinische Philharmonie Koblenz and the Koblenz Theatre.

Alongside his opera activities, Shao-Chia Lü is equally at home on concert podiums. In 1994, he had his debut with the Münchner Philharmoniker by replacing Sergiu Celibidache at the last moment for two unchanged programms (including Bruckner's Symphony No. 8). The triumph of these concerts brought him several further invitations from this orchestra. Apart from the Münchner Philharmoniker, Lü has worked repeatedly with many leading European orchestras, such as the Oslo Philharmonic, the Orchestra Sinfonica di Santa Cecilia in Rome, the Norwegian and Swedish Radio Orchestra, the Helsinki Philharmonic Orchestra, the Royal Liverpool Philharmonic, the Bournemouth Symphony Orchestra, the Goteborg Symphonics, the Orchestre National de France, the SWR Stuttgart, the Rundfunksinfonieorchster Berlin, the Staatskapelle Weimar and the Frankfurter Museumsorchester. In November 2011, Shao-Chia Lü made his much acclaimed debut with the Royal Concertgebouw Orchestra in Amsterdam. In Asia, after his debut with New Japan Philharmonic in December 2012, Shao-Chia Lü was invited to conduct the Tokyo Metropolitan Symphony Orchestra and the NHK Symphony Orchestra, among others, during the 2013/2014 season.

Shao-Chia Lü has been Music Director of the Taiwan Philharmonic (the National Symphony Orchestra of Taiwan) since August 2010.

Chun-Chieh Yen has concertized in Europe, Asia, and America, embracing a wide range of repertoire. Concerto performances take Yen to orchestras all over the world including the Russian National Orchestra, Staatsorchester Rheinische Philharmonie, and the National Symphony Orchestra of Taiwan. He has enjoyed collaborations with many conductors, including Mikhail Pletnev, Henry Mazer, Uri Mayer, Shao-Chia Lü, Gernot Schmalfuss and Günther Herbig. Yen won numerous prizes, including Third Prize at the International Youth Tchaikovsky Competition (1997), First Prize at the 4th Hamamatsu

International Academy Piano Competition in Japan (1999), and Third Prize at the 4th Prokofiev International Competition in St. Petersburg (2004). His album on Universal also earned him the award of Best Classical Performer at the 19th Golden Melody Awards in Taiwan. Currently Assistant Professor of Piano at the National Taiwan Normal University.

Founded in 1986, the Taiwan Philharmonic, also known as the National Symphony Orchestra at home, is hailed as one of the best orchestras in the Asian Region and became the resident orchestra of the National Chiang Kai-Shek Cultural Center in 2005. Starting April 2014, the NSO has become an affiliate orchestra to the National Performing Arts Center. Led by renowned conductor Shao-Chia Lü as its 5thmusic director starting August 2010, the NSO has increased the country's cultural richness and music educational strength throughout Taiwan.

MING-HSIU YEN: Flying Towards the Horizon 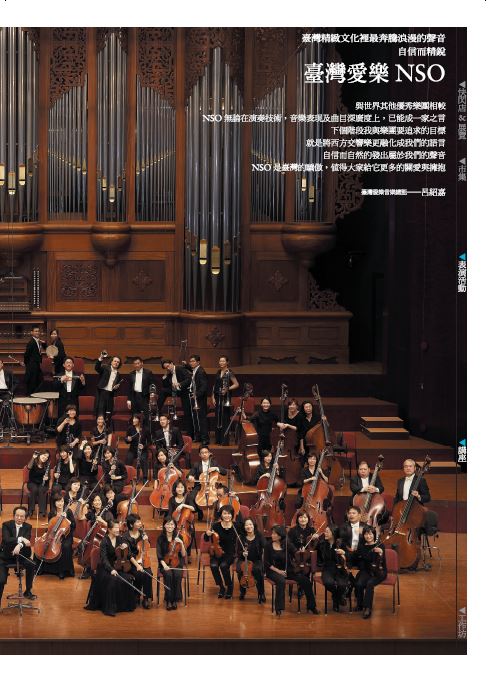 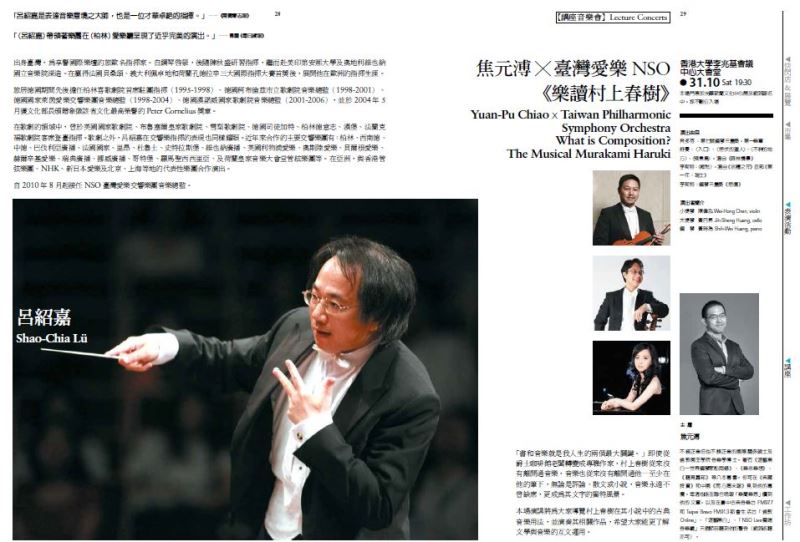 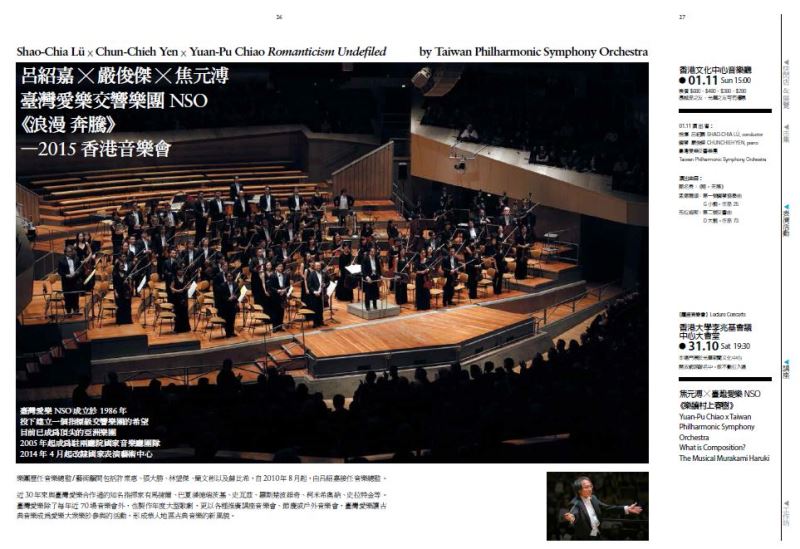 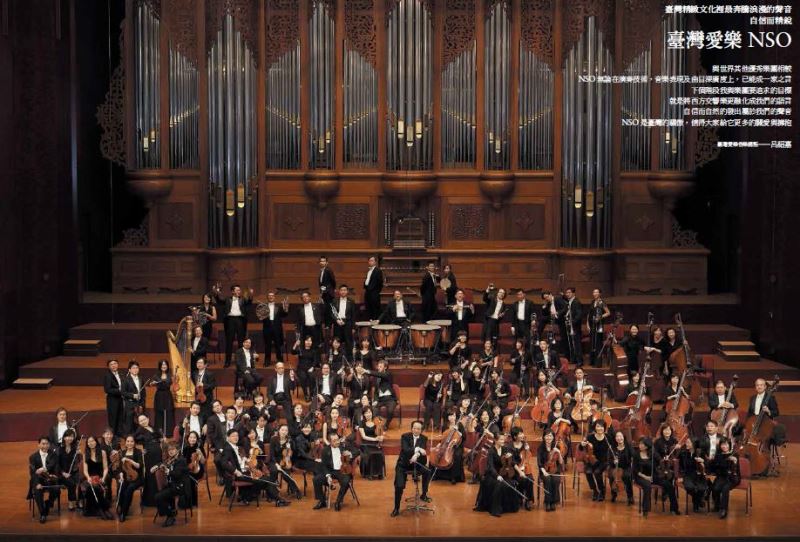